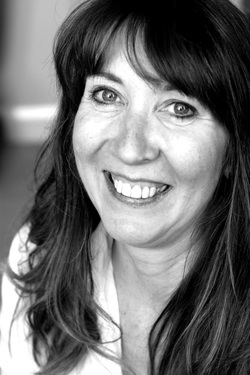 Mo O'Hara is the author of the "My Big Fat Zombie Goldfish" series published by Macmillan.
Originally from America, Mo moved to London because she wanted to live abroad but spoke no foreign languages.  After a brief and unsuccessful stint as a serving wench at the Tower of London she found work as an actress and comedy performer.  Mo has perfomed regularly at Edinburgh and London comedy festivals. A few years back she got a job touring around the UK as a storyteller and that's when she discovered that kids liked, laughed at and didn't fall asleep when she performed what she wrote herself.  She was hooked on writing and performing for kids. Some quotes from Mo's storytelling sessions are:
"I guess you were a bit better than the rabbits with big heads that were here last week."
"Can I rewind you and watch you again after lunch?"
And "How did you know me to put me in your story?"
Mo still lives in London, she still speaks no foreign languages (unless you count American) and she still has a sneaking suspicion that the rabbits with the big heads were really better than her but the kid was just being nice.

Mo can deliver fun workshops with Key Stage One and early Key Stage Two classes in either Poetry Popping ( where kids learn to let the poems inside them pop out and create various types of poems as a group as well as creating  a template for them to write their own poems later as homework or as an in class exercise) or Poetry Perfomance ( where children take poems off the page using acting  and movement and use sound effects, voice and stage technique to make a drama out of poetry.) You can contact Mo via Gemma Cooper at The Bent Agency.

This is how writing poetry makes me feel! 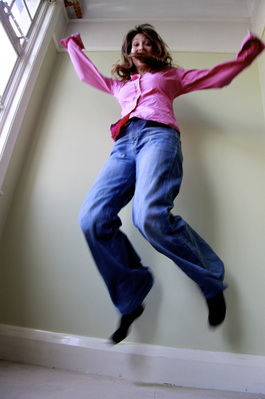 Poems for me really come alive when they are read aloud.  They are words on a page that are just busting to be heard. So I like to let them loose.

Here's a poem that I wrote  that's short but sweet.

Mermaid Wish
I found a magic wishing shell and wished a magic wish
That I could be a mermaid girl, half human and half fish.
If I had that wish to do again, I'd make it more specific.
I'm the only fish head, girl legged mermaid swimming the pacific.